For the past several years, many investors have become disenchanted with the stock market, spending most of their time recovering from losses and very little time actually growing. They are feeling the pain of loss much more acutely and have become more concerned about avoiding losses than they are about achieving potential gains. They sense that the financial markets are shifting with global monetary policies diverging while growth rates around the world are converging in a new era. How does one navigate the increasingly turbulent cross-currents without getting pulled out to sea by the undertow?

At the root of the problem is the fact that during one of the most tranquil periods in stock market history, most traditional risk models have failed during times of stress. All of the key pillars of “Modern” Portfolio Theory were put into place between 1951-1973 during one of the most tranquil period in US stock market history (“Prediction of Systemic & Specific Risk in Common Stocks,” by Barr Rosenberg, 1973), thereby incorrectly basing assumptions about future correlations on recent past performance.

In the real world, these theoretical correlations are asymmetric and unstable: observed correlations have actually declined during bull markets and have actually increased during bear markets. In other words, Modern Portfolio Theory breaks down in extreme environments.

At the institutional level, world central banks are using proven portfolio crash testing risk engines. An entire library of plausible “what-if” scenarios have been developed by professional risk managers based on today’s economic, financial, and geopolitical circumstances, in order to analyze how portfolios would react under different headline events.

Forward-looking stress tests overlaid with a behavioral finance framework have become the answer to backward-looking risk models – and are now available to individual investors through select, technologicallyevolved, financial advisors. Rather than fight the forces of human nature, we can harness the natural instinct of risk aversion to go get an investor’s “fair share” of the upside in the financial markets, rather than at the casinos. These algorithms can be applied to 401(k)’s, 403(b)’s, as well as accounts held away at any financial institution. Custom risk mitigation strategies from over 1,000 variables can be assembled to create a worst case scenario for even privately owned family businesses, real estate holdings, and/or executive stock options/grants. The stress test results can provide clues where hidden correlations lie that are NOT apparent during more normal times. They enable a savvy financial advisor to work towards proactively decreasing the effects of major drawdowns while keeping the investor on track. (To be clear, stress tests do not predict the future, nor assign probabilities to different states of the world.) 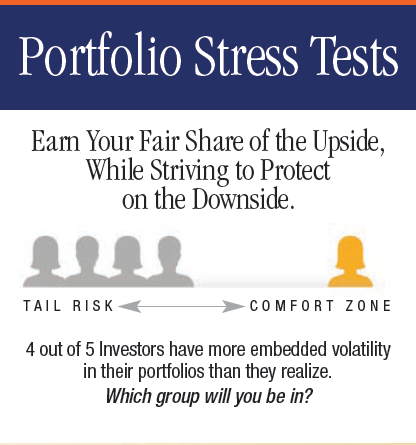 Despite the return of choppiness in what still
remains unchartered waters, the end result
is an informed investor who confidently
reaches her financial planning goals, with
the collaboration of today’s cyborg financial
advisor.

Call 412.600.2725 or e-mail
ml@hampton-wealthmanagement.com to schedule an appointment for a complimentary risk analysis.
Wealth Crash Test
Get In Touch